As many know, Texans recently went through quite a bit of turmoil caused by snow, ice and frigid temperatures brought on by the recent arctic freeze.

Many of our staff and contractors were adversely affected and three of our CPG terminals experienced brief service interruptions. The terminals are now open, fully operational, and getting caught up from the shutdowns. Unfortunately, plumbing supplies and water are still in high demand and short supply. Because of this, our CPG Terminal teams led regionally by Jessie Gonzalez, sprung into action and partnered with CPG Mobile's terminal manager, Tina Rupe, as well as our Driver Experience team, to source some basic plumbing supplies and 16 pallets of water shortly after the storm.

Tina and company loaded a 40’ container and dispatched one of our most loyal contractors, Robby Goodwin, to go on a humanitarian mission to aid in relief efforts. Robby, who has been with CPG for almost a decade, normally runs regional moves out of Mobile. He was more than happy to stretch his legs and make the run to Texas to help his CPG fam.

The shipment arrived at its first stop in Houston on Wednesday the 23rd, from there Robby headed to Dallas and Fort Worth to make the final deliveries. CPG staff, our independent contractors, and one of our sister companies' in the area, will all benefit from this team effort. 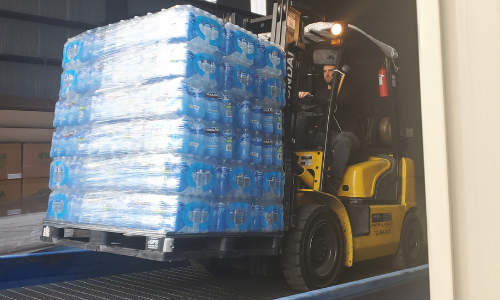 While the weather has greatly improved,  millions of affected Texans still have a ways to go to repair damages to their homes and community. If you would like to contribute to relief efforts click here to learn how you can help.