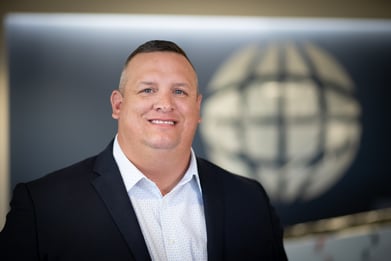 CLEVELAND, Ohio – ContainerPort Group (CPG®) is pleased to announce that Joey Palmer has been promoted to President, effective October 19, 2021. He previously served as the Executive Vice President of Trucking for CPG. This news comes as the organization is celebrating its 50th anniversary during the week of October 18, 2021.

“We are really excited to announce Joey’s promotion,” said Michael Smith, CEO of World Group, CPG’s parent company. “He & I have worked together for several years, and in that time, he has demonstrated an immense capacity for understanding both the strategic direction of CPG as well as the tactical steps needed to meet the vision. We are looking forward to great things to come as we continue CPG’s mission of being the drayage company of choice for both our drivers and customers.”

World Group Chairman Fred Hunger added: “Joey is a great thought partner and brings strategic insight and critical thinking to the decisions he makes. He's always a champion for our culture and his passion for our people is contagious.”

“We chose to share this news during our 50th anniversary celebration because we aren’t just celebrating our past, we’re looking toward our future, as well. Joey’s ability to connect with people, combined with his trucking experience, will absolutely be an asset as we build the future of CPG.”

Prior to joining CPG, Mr. Palmer built his industry acumen with several regional and national carriers. At each stop, he demonstrated a grasp of larger industry issues and quickly gained additional responsibilities and oversight. He joined Michael Smith at ASF Intermodal, which soon joined forces with CPG.

“This is an absolute honor for me,” said Mr. Palmer. “When I joined CPG, I saw the organizational potential and shared that vision with Michael. It’s a well-established, operationally sound organization with a great reputation. The team I get to work with every day is full of exceptional people who live our core values every single day.”

Nationally, CPG has been recognized as a Top 10 Drayage provider by both Transport Topics and the Commercial Carrier Journal for several years. The company is planning expansions of both its service offerings and its geographic footprint.

Mr. Palmer elaborated on this vision, saying “We have the ability and opportunity to scale our service offerings well beyond what we offer today, and we will do that through a relentless focus on our customers, our drivers, and our people. Customers will see additional solutions to solve their supply chain puzzles. Drivers will see an ever-improving experience led by enhanced technology and tools to make it easy to drive with us. And our team will continue to invest in the culture we’ve built, with more hands-on opportunities for training and development.”

“Together, this combination will allow us to build on CPG’s already strong legacy. Again, I want to thank Michael Smith and Fred Hunger. Being able to carry out this vision is a privilege, and I’m excited to see where we can take this.”

Mr. Palmer has led several teams in his time with CPG, including oversight of domestic and drayage brokerage, CPG Logistics, and most recently as Executive Vice President of Trucking. He and his wife and four children recently relocated to Cleveland and are eager to build new relationships and settle into the community.